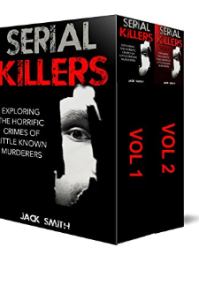 About 2 in 1 Box Set Serial Killers: Exploring the Horrific Crimes of Little Known Murderers Vol. 1 and Vol. 2 by Jack Smith

“Serial Killer” as a term can be difficult to define. Different criminal investigation units typically require two, three, or more attributable killings over a period of time before an individual can be considered to have joined the ranks of the serial killers. However, it is not really the numbers which can interest so many people and scare others. Instead, it is the often random nature of the killings. Rather than crimes of passion, crimes of financial reward, or instances when an individual has reached their end of their emotional tether, the crimes of serial killers have often been planned days, weeks, or months in advance. Targets can be random, but the killings are often planned in great detail. From cannibalism to mental health concerns, from ritualistic witchcraft to a simple interest in violence, learning what motivates these people can offer both insight and further confusion.

Serial killers are big business. From the countless books, films, and television programs to the fascination of the twenty-four-hour news networks, there is something about these mass murderers that catches the eye and catches the attention. While many people are familiar with the better-known killers like John Wayne Gacy or Jack the Ripper, this is not the end of the story. There are so many examples of serial killers from around the world that many of them have simply been forgotten about.

But that does not make their crimes any less serious. Instead, some of these serial killers committed heinous acts above and beyond those we have come to expect when thinking about the worst psychopaths in living memory. In cases such as these, the truth is often stranger than fiction. For every Hannibal Lecter or Norman Bates, the murders committed by the people detailed in this book are often more extreme, violent, and off-putting than anything you might find in fiction.

The cases presented in this book are extreme cases and display to what extent a serial killer can go.

Read the stories of little known serial killers that went beyond the limit of our imagination to perpetrate vile unremorseful murders in the blink of an eye.

Inside find 19 fascinating cases such as:
•The isolated loner who butchered women and scattered their remains across Alaska
•The killer who hurled huge stones through his victim’s heads
•Colombia’s most violent serial killer
•The police investigator who was secretly a serial killer
•The son of a candy factory owner who carried out the Houston Mass Murders
•The Mexican murderer who preyed on migrant farm workers
•The man who would strangle women and leave their bodies beneath the bed
•And much more