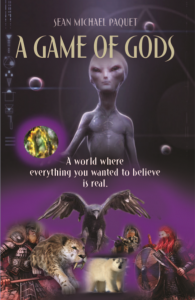 A Game of Gods by Sean Michael Paquet

Look up at the stars, my friends. Have you ever wondered what if?
What if there is life out there?
What if all of those conspiracy theories were real?
What if a place existed where everything you wanted to believe was real?

Come my friends and enter such a world.

Meet a young warrior gifted with an inner sight who can speak to spirits and animals.
Walk beside the Sabretooth, who is oath-bound to protect him.
Rescue an orphaned Polar Bear cub with undying loyalty.
Save a soldier from an Earth on the brink of mass destruction.
Befriend a giant from a distant past no one remembers.
Commune with a Raven who spies upon the ways of men.
Interact with beings who wield cosmic technology by thought.
Become the agent of a mysterious artificial lifeform who experiments with whole worlds.
Enter a Utopia destined to succeed or fail based on the choices which drive the hands of Fate.

Come with me, Travelers, and become part of a game. One played by entities of unimaginable power.

Come and play A Game of Gods

Author Bio:
Sean Paquet is an author, investigative journalist, and freelance writer who lives and works as an American Expatriate in the Philippines. He retired from active duty military service in 2013 after 24 years. He then was a private defense contractor in the Middle East until 2018. Sean is from a small town called Carp Lake in the Northern part of the Lower Peninsula of Michigan. He grew up loving to read, write poetry, and had enough promise as an artist to consider it full-time until he decided to join the military. Sean has always had an interest in the weird, unusual, and strange things that exist on the fringes of our reality. His interest in heathenism, metaphysics, meditation and out of body experiences led him to publish his first novel titled A Game of Gods in June, 2020. His second novel, titled The Jarl’s Shadow is a Work in Progress, and explores metaphysical concepts along with personality disorders while maintaining a science fiction/fantasy related backstory of unimaginable alien forces, lost civilizations, and conspiracy theories.