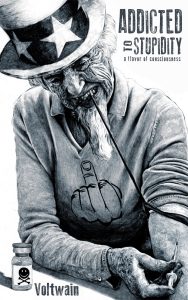 About Addicted To Stupidity: a flavor of Consciousness By Voltwain

A Vermont farming family ponders the state of the world and decides to change it.

Welcome to Philosophy Farm and Truth Nursery. Come on in and think awhile with the Fini’s and their many friends, neighbors, farm patrons, and, yes, even enemies. The Finis are a three generation Vermont farming family whose daily habits are to laugh, think, farm, and work for the creation of the Common Good for the Good of All. Gramspa and Nina, political refugees of the Spanish Civil War fleeing Franco’s fascism, settle in Vermont, start Farm Filosofia and raise a son, Tiny. Tiny, a lifelong politician, farmer, and philosopher, marries fellow University of Vermont student, Ebie, who founds various social movements starting with a Stop Lying to Children campaign and including, but not limited to, Free Food For All and Flowers Not Firearms, which the entire family participates in. Choosing to stay, live and work on Farm Filosofia, Tiny and Ebie have two children, Filo and Sofi, who are raised in an environment of invented holidays, endless inquisitiveness, and boundless curiosity about why we are, how we are, and what can we become, as they grow up to continue Consciousness’ struggle against power, wealth, and religious rule.

Thoroughly examining the how and why America has become what it currently is, including much Vermont, as well as US, history, the Finis and their friends discuss perennial philosophical topics such as Free Will, Truth, Faith, Meritocracy, Economy, the Law, and the Origins of the Multiverse in their pursuit not only of the Good Life, but of becoming the Good Citizen of Consciousness. Follow the family’s adventures from war torn Barcelona to lie tattered America, as they hold Talk Shops in Trum de Tokeville, create new holidays, interact with the Garage Gang, stump for Human Rights, examine the ‘State of Stupid’, set up a global experiment for the proof/disproof of a God’s/simulator’s existence, and ultimately challenge the powers that be and the reason they are in a worldwide movement known as The People’s Lobby, which culminates in The Great Reveal – all from the observational point of view of Filo, who, like his father, has always lived on Philosophy Farm, dedicating their lives to maintaining its tradition as a Truth Nursery. Warm, funny, provocative, irreverent, honest, humble, controversial and courageous, this “Last Great American Novel” is a beautifully written and hilariously insightful contemporary masterpiece that crafts an intricate argument that clearly explicates what is wrong with America and how it, and the world, can be fixed.

Author Bio:
The Voltwain Collective includes educators, former clergy, farmers, ex-cons, business owners, artists, writers, the homeless, and chefs. It is working daily to end the tyranny of Faith, Meritocracy, Law, Consumerism and Free Will. They seek, through the People’s Lobby, to create a Common Good for the Good of All – NOW! Anyone who is doing the same is automatically a member of the Voltwain Collective. If you are not already a Voltwain Collective member, this is your invitation; if you already are a member, thank you on behalf of the Common Good and the ALL.