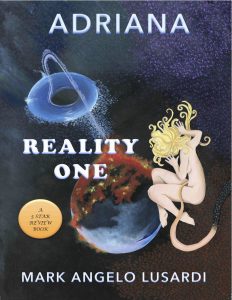 When an autistic child accidentally kills her twin, the balance of her mind is disturbed and she is institutionalised. As her late teens approach she is guided back towards ‘the normal world’ by her psychiatrist, but as he delves deeper, he discovers that her mind is very far from ‘normal’ and far stranger than he could ever have imagined. Neither human nor alien she is something this world has never seen before and after a number of incredible journeys, the true nature of her reality is finally revealed.
‘Not for the faint-hearted. Rips out your soul and it says look at me! Breaks all the rules and happily marches into territory where no other author would ever dare to tread.’ Dr C Jones

Author Bio:
In my life I have been a university lecturer, an inventor, a plasterer’s assistant, a recording engineer, a record producer and a song and music writer for both film and commercial release. I have also owned and run a number of recording studios (all called Mark Angelo Recording Studios ) and now I am an author. Science was always my first love. As a child, on birthdays and at Christmas, it was not train sets and toy cars for me. All I wanted was books. Books about palaeontology, astronomy, biology or physics. That was until I encountered my first science fiction book. I was hooked. Isaac Asimov, Arthur Clark, Philip K Dick, Harlan Ellison and many others became, for me, new heroes to stand alongside Einstein, Newton, Heisenberg and Maxwell. You could say that these are the people that, to a large extent, must bear the responsibility for creating the person that I am today.
So after many years of doing just about everything else I have, perhaps now in my second childhood, finally decided to go back to the things I always loved the most and this time, emulating the greats, dared to write a book of my own.