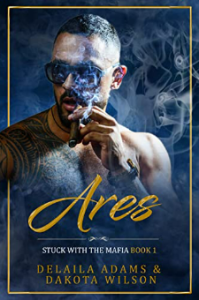 About Ares: Stuck With The Mafia • Book 1 • Contemporary Romance by Delaila Adams

♥I’m not Jealous. I’m Territorial.♥
♥Jealous is when you want something that’s not yours.♥
♥Territorial is protecting what’s already yours ♥

⭐She falls prey to a powerful Mafia Lord who possesses all of the features that a woman wishes: he is extraordinarily attractive, wealthy, and powerful.

Irresistible and dark, mysterious and breath-taking, he is Ares, a ★Possessive Italian Mafia Boss★.

♀ Ivy is an orphan who works as a waitress and in her senior year. She is a young woman incredibly alluring and every man’s dream.

♂ Ares is quickly smitten when he sees the youthful beauty. Although a man accustomed to having whatever his heart desires, he’s a little cautious as she looks pretty young.

When he can’t get her out of his head, he dispatches a team of detectives to track her down and learn everything there is to know about the girl who has quickly become an obsession.

Ares was silent for a moment. Ivy felt his hand landing on hers, after which he grabbed a firm hold of it. Ivy still pretended to be asleep, just so she wouldn’t have to make up any excuses for what she’s heard.

“You’ve worn her out, haven’t you?” Reece asked, evidently talking about Ivy now.

“I didn’t know you had your eyes on her?” Ares tensed up a little. Ivy could feel his mood shifting. “That’s none of your business?” ♥

“I don’t blame you. She’s always looked like a catch to me. Always thought that if you wouldn’t make your move soon, maybe I woud- ?

“I’ll never allow you to lay as much as a finger on her, do you hear me?”

Reece was an inexplicable man. One moment it would seem like he thought Ares was the most terrifying man on the planet, and the next he would be joking with him like he lived entirely carelessly.

★★★Join me in reading about how this Dominant’s Love transforms his lover’s love ♥ into hatred.★★★

Delaila Adams has been writing contemporary stories ever since she was a young student. She was inspired to become a writer after becoming frustrated at the endings to some of her favourite books, and she started writing alternate ending endings at the age of fifteen. As she grew older, she progressed to writing more short stories and parts of her work were published in her high school magazines. ❣