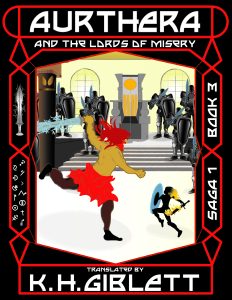 About Aurthera and the Lords of Misery

“This planet’s true ruler does not want anyone escaping, get this ship into orbit, and you’ll get blasted into chunks. Sorry kids, but we’re all trapped down here.”

The Island trials are finally over, but a greater challenge lies in store for Aurthera and her friends.
Cojan and his evil Red Lords control the lands beyond the proving grounds. Their rein is absolute, and they rule this planet with an iron grip. Their armies of black knights pillaged and enslaved the free peoples.
All live in fear of the knights, and the lost children soon find themselves coming face to face with the lords. Can Aurthera and her friends survive against the forces of tyranny? Or have they finally met their match once and for all?
Blood will be shed, children will fall, and a legend will rise.

Join Aurthera in this epic next step in the Journey of the lost children Saga!

Author Bio:
By age 25 K.H. Giblett had traveled to 26 countries working as a translator for the UN. He’s worked in war zones in the Middle East, and helped broker deals in Africa, India, and Europe. One day he gave it all up and focused on unravelling the secrets of our past. Not much else is known about Mr Giblett. Some say he discovered something and now works tirelessly translating old stories.