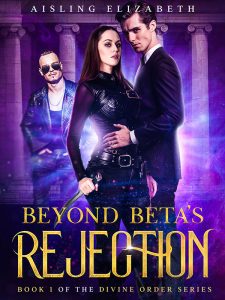 About Beyond Beta’s Rejection by Aisling Elizabeth

“I, Colton Stokes, reject you, Harper Kirby, as my mate.”

When Harper’s fated mate, and future beta of her pack cruelly rejects her on her 18th birthday, before mysteriously changing his mind, she must decide if she is willing to risk her wolf to accept his rejection and truly break the fated bond. It is only when she flees her pack, leaving her family and friends behind, does she think that she is finally safe from the terrible events.

But fate has other ideas, and ten years later Harper finds herself back in her old pack as an Elite Warrior for the Supernatural Council, to investigate the new invading Alpha with a reputation for being stone cold and ruthless. And her former mate, now Beta of the pack, is determined to get her back. Things are only further complicated when she discovers the new Alpha is her second chance mate.

Can Harper investigate her new Alpha mate? And what does the Beta know that makes him so hell bent on taking Harper all for himself? Devastating betrayals and deep rooted secrets that rock Harper’s world and challenge her belief in who she really is, are revealed in Book 1 of the Divine Order Series.

Author Bio:
Aisling (pronounced ASH-LING) Elizabeth is a bestselling author on episodic and serialised release apps, specialising in Paranormal Romance with a spicy twist. Her books have made it into Best Selling, Top Romance, Readers’ Choice and many other categories in some of the top serialised platforms on the market. And all in her first year of publishing her work. In addition to this, Aisling also gained international number 1 bestseller status in a book collaboration and helped to raise money for much needed charity causes. Aisling released her first full length novel in April 2022.

When Aisling is not working on her latest books, she is a mum to two amazing children and two noisy superhero cats called Thor and Loki, and lives in Yorkshire, UK. She is a bit of a geek at heart and loves music, so she likes to visit fan conventions and music gigs.