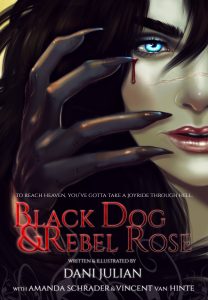 About Black Dog and Rebel Rose

Half-angel Rose has always flown solo, and that’s just how she likes it. Trained since youth by her angelic father in the ways of battle, she flees the heartache of a broken childhood by hunting the nightmarish creatures that hide in the shadows. When she discovers a nefarious plot involving a mysterious witch and her parade of grisly horrors in an abandoned California town, she eagerly treks out to see what blood can be spilled, only to discover that a boy from her past–now grown to manhood–has sniffed out the same prize.

Skriker, the Halfling son of a demon and a stripper, is a supernatural hunter with nothing to tie him down. Between gore-splattered hunts slaying things that go bump in the night, he fills his days and nights with women, cage fights, and hard, fun living. But when the tattooed, Harley-riding bad boy makes a trip out to the rotting burg of Paradise Hill, he finds that he isn’t the only hunter to arrive on the scene…and she’s someone he was certain he’d never see again. Fierce and beautiful, Rose forces feelings he’d buried long ago to rise to the surface, drawing him into a partnership that neither ever expected.

As the unlikely pair battle their way through the ruins, Skriker and Rose must survive not only the vicious enemy pursuing them but the reawakened–and forbidden–emotions that both were sure had expired…emotions that might make or break the fate of Creation itself.

Author Bio:
DANI JULIAN is an award-winning author and illustrator of horror and fantasy. Frequently compared to authors such as Francesca Lia Block, Holly Black, and Laini Taylor, she is the author and illustrator of the cult-followed horror novel BLACK DOG AND REBEL ROSE (now in development as a feature film), and the wildly unique punk fairytale series, SHALE CITY. Her digital illustrations can be found in publications and private collections worldwide.

She lives in a 106-year-old California Craftsman cottage in San Diego, CA. with her husband, acclaimed punk muralist and artist Alex Julian, her son Ryker, a black barn cat named Halloween Gabe, and Arrow the rat terrier mix. When not writing or painting, Dani can be found baking, gardening, watching horror flicks, indie films, and science documentaries, and voraciously reading anything she can get her hands on.