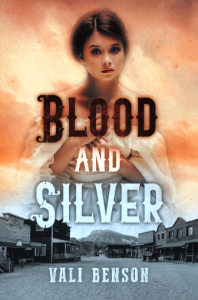 About Blood and Silver by Vali Benson

What is a twelve year old girl to do when she finds herself in the silver boom town of Tombstone, Arizona, in 1880, and her only home is a brothel and her only parent is a drug-addicted mother? If she is Carissa Beaumont, she outsmarts the evil madam and figures a way out.

After tricking the madam, Miss Lucille, into summoning a doctor for her mother, Lisette, she discovers that Miss Lucille has been drugging her. She and the kind doctor make a plan to try to save Lisette by dosing her down on the drug.

Doctor Henderson tells Carissa that the only source for the drug is a Chinese immigrant named China Mary, who lives in Hoptown, at the other end of Tombstone. Carissa has no choice but to go to the powerful woman for help. Many say that China Mary is the one who really controls Tombstone.

China Mary admires Carissa’s brave spirit, and uses her influence to get her a job at the new Grand Hotel, which will free Carissa from her many duties at Miss Lucille’s. She will work along with Mary’s twelve year old niece, Mai-Lin. The two girls become fast friends.

Then, disaster strikes, and the two girls must work together to stay alive.

With a host of colorful characters and meticulous attention to period detail, Blood and Silver is a story of the best and worst of human nature, the passion for survival and the beauty of true friendship.

Author Bio:
Vali grew up in the Midwest. She now lives in Tucson with her husband, two sons and grandchildren.

After graduating from the University of Illinois, Vali started and sold two successful businesses before she decided to pursue her real passion of writing. She published several articles in a variety of periodicals, including History Magazine before she decided to try her hand at fiction.

In April of 2020, Vali published her first novel, “Blood and Silver”. That same month, she was also made a member of the Western Writers of America.