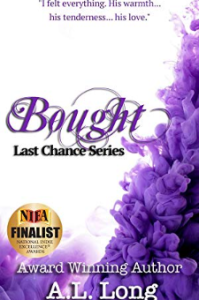 The last memory that Alannah ‘Lanie’ Jackson has of her father is the day he went away. Hidden away in an attic from the rest of the world, the only thing that Alannah ‘Lanie’ Jackson can hold on to is the memory of her father and the hope that one day he will come for her. Every day that passes, the memory of her childhood disappears and she learns that her only purpose now is to please. Trained to act a certain way, the day comes when she can finally be free. She only hopes that the man who purchases her will be kinder than her current master.

This is the first book of the Last Chance Series.

Find all of A.L. Long’s books at www.allongbooks.com

The wind had been whipping around all morning. If I hadn’t known better, I would have thought that I was in the Arctic instead of Oregon. There wasn’t very much that I could see through my small window, but it was big enough to see that the bare branches of the oak tree that had died long ago were swinging in the wind. Not many people came to visit the mansion since I began living here fourteen years ago. But in the last six months no one came to visit at all. At first, I thought it might have been due to the change in weather, but then Master Winston said it was because I didn’t live up to their expectations and therefore, I was of no interest to them. He blamed it on my inability to learn and lack of obedience.

Moving away from the window, I ducked my head and wandered over to my small bed, which was nestled in the corner of the space that was my room. Pulling the covers over my body, I tried to keep warm. The attic was very poorly insulated and the exposed beams that held the rafters were proof. Sometimes it had gotten so cold that I could see my breath. I found the best way to keep warm was to pull the covers up over my head and trap the warmth of my breath beneath them.  As much as I hated this room, I hated what waited for me on the other side of the door when Master Winston came to call even more.

Closing my eyes, I let my mind wander. As I slowly began to fall asleep, I imagined myself as the fairytale princess who was locked in the attic by her evil stepfather, waiting to be rescued by a handsome prince. I knew the chance of ever being rescued would be slim to none, but just the thought of it actually happening was something that I would never stop hoping for. I wished that things could be as they were when I was younger. I would give anything to be together with my father again. So much time had passed since I’d seen him that every day that went by, my thoughts of him were dimmer. I feared that soon I would forget him all together. I wasn’t sure if it he would even be able to find me. Last Chance, Oregon, was just that, and not many people came here. I don’t think many people knew about this out-of-the-way town, at least not anyone who cared.

“Push me higher, Daddy, I want to go higher and fly like the birds.”

“Lanie, if I push you any higher you are going to fall.”

The warm wind felt so good against my skin. I loved my new swing set. It was pink and purple and had two swings, a slide, and a Roman glider. It was the perfect gift for my fifth birthday. I knew why my dad had put in so many hours at work. It was so that he could buy me this swing set. Pumping my legs harder, I could feel myself going higher and higher. It was as though I could reach the birds above me.

Letting go of the chain, I reached out to touch one. It was so close, but not close enough. I felt myself falling from the swing. Instead of hitting the ground as I should have, I was sent spiraling into a pit of fire.

Some would call me a little naughty, but I see myself as a writer of spicy thoughts. Being a romance writer is something that I never imagined I would be doing. There is nothing more rewarding than to put your thoughts down in words and share them. I began writing in 2013 and have enjoyed every minute. When I first started writing, I wasn’t sure what I would write. It didn’t take me long to realize that romance would be my niche. I believe that every life deserves a little bit of romance; a little spice doesn’t hurt either. When I am not writing, I enjoy the company of good friends and relaxing with a delicious glass of red wine.

Visit me at www.allongbooks.com for all of my new releases and book signing events.