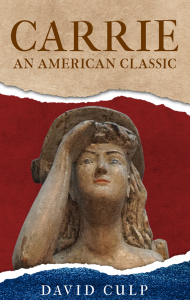 About Carrie: An American Classic by David Culp

Carrie Larsen left a small town in Ohio a week after graduating college in 1963 to explore the counterculture in the Great American West. Four years later, tired, she came back to her parents’ house. Perhaps for a week? Perhaps for years?
Carrie became the town Veterinarian on Main Street. She balances her enthusiasm for sex, drugs, and rock’n’roll with a search for social justice, compassion, and a love for playing J.S. Bach on her mother’s concert grand piano.
Carrie loves her parents, as long as they last, but resists her mother’s hopes that she’ll get married and have a baby, at least in that order.
Carrie calls herself “A Buddhist, not a Romantic.” She never stops searching. Was life in the West her alternative reality, or is it life in the small town?
Find out what makes Carrie Larsen an American Classic.
Carrie: An American Classic is being sold at a discount price of 99 cents from 9-20 through 9-24.

Author Bio:
David Culp used to have a day job in Washington, D.C. He and his wife raised two daughters in Northern Virginia. He attended schools in Ohio and North Carolina, and has travelled as far Southwest as the Galapagos and as far Northeast as Katmandu. And Further. When he is not writing “intelligent, entertaining books,” David spends his time playing the cello, enjoying primarily jazz and blues, fighting climate change, and filling the numerous bird feeders in their back yard.
He’s published another novel: The Book of Mathew L. It's about Carrie's big brother. His life headed in other directions.