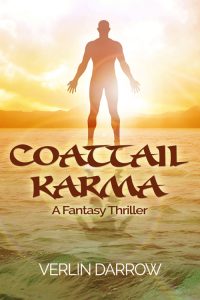 About Coattail Karma by Verlin Darrow

Buddha’s clone, victim of a conspiracy, or just plain crazy? If only he knew.
Has psychotherapist Sid Menk’s mentor actually granted him enlightenment? As kidnappers, rogue monks, and Maori gangsters chase Sid through New Zealand, India, and northern California, his sense of identity dissolves and something amazing takes its place.

Buy the book, and follow the author on social media:
Learn more about the writer. Visit the Author’s Website.
Get This Fantasy Book From Amazon.

He can be reached at verlindarrow@gmail.com.

Verlin was patted on the head by Einstein, travelled around the world on a spiritual pilgrimage, and has published three previous novels under other names (but he hides the extant copies of these under his bed.)

He served as the assistant guru (kind of like a vice-president but more clueless) in a small, benign spiritual organization. Eventually, he graduated himself and everyone else out of it. These days, he mentors a handful of people as they find their own way.

Verlin missed being blown up by Mt. St. Helens by ten minutes, survived the 1985 Mexico City earthquake (8.0), and (so far) has successfully weathered numerous internal disasters.

Here is a collection of Verlin’s other unlikely life events:
​
-Journeyed around the world on a spiritual pilgrimage
-Rescued a dog that fell through the ice
-Patted on the head by Einstein
-Vowed not to cry anymore at age 5 and only did once until 18. (This is NOT a good idea).
-Wrote radio jingles
-Had amnesia
-Grandfather was last of 23 children
-Great-grandfather worked seven days a week for 70 years
-Taught at universities
-Can heal with hands
-Call-in radio therapist
-Published novelist (under other names)
-Lucid dreamer until the age of 8
-As a young man, he could dunk emphatically, jump onto the roof of a VW bug from a standing start, and otherwise show off amazing aerial feats to girls who never seemed to be impressed.