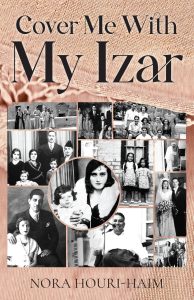 About Cover Me With My Izar : A Jewish Family Saga

Through a series of stories that span several generations, ‘Cover Me with My Izar’, brings to vivid life the modern history of Iraqi Jews.

The stories are fascinating, humorous, filled with humanity, always captivating, and brimming with heart. Each story is told from the viewpoint of a different character across the generations.

From the tales of the vibrant Jewish community in Baghdad, through the terrors of the Farhud Pogrom to the mass immigration into Israel, a rich story of struggle and learning to adapt unfolds.

From the miracle that was visited upon the barren Latifa, to the disaster Ezra, the sword collector, brought on his own head; from Yvette, who decided to go and earn an education for herself against all odds, to the story of Itzik and Nava, children of the third generation born in Israel who wanted to be integrated into its newly forming society. These are just a handful of the rich tapestry of stories woven together to form the fabric of this book. A fabric as unforgettable and rich as that from which the traditional Izar gown, worn by the Jewish women of Iraq, is made.

Author Bio:
Nora Houri-Haim was born in 1953 in the “new, old” city of Tel Aviv, to parents who’d made aliyah from Iraq. She spent her childhood surrounded by her huge extended family and grew up on the knees of her aunts and uncles, listening to stories from the “old country.” These stories were in sharp contrast to the reality around Nora. In the fledgling state of Israel, anything foreign, and especially anything connected to the Arab world, was frowned upon. This dissonance defined Nora’s childhood and inspired her writing as an adult. She finished her schooling in Tel Aviv, and then served in the Israeli military as an educational adviser. After completing her BA, Nora got married, had four kids and spent eight years teaching 6-8th graders. Nora completed her MA, with honors in Literature and Creative Writing from Ben Gurion University in the Negev. While there, she began writing her first novel, Cover Me with my Izar”. The novel was nominated by her publisher for the Sapir Prize for debut novels and was praised by the National Library during the year it was published.