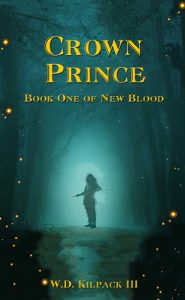 Natharr is Guardian of Maarihk, one of a long line of protectors dating back to the Firstborn Age, before the Aa Conquest. Natharr’s is an ancient role, rooted in his Firstblood, giving him Sight to see what is yet to be, adhering to his sacred duties even in the centuries since the Firstborn were forced to the brink of extinction by the Aa.

Natharr still stands guard over all men, Aa or Firstborn, Seeing what will come to pass, deciding what is unavoidable and what is not. Spending decades planning, even for saving the life of the newborn Crown Prince Vikari so he may one day reclaim the throne in the land where Mankind was created.

Buy the book, and follow the author on social media:
Learn more about the writer. Visit the Author’s Website.
Get This Fantasy Book From Amazon.

Author Bio:
W.D. Kilpack III is an award-winning freelance writer published in two countries, with works appearing in print, online, radio and television, starting with his first publication credit at the age of nine, when he wrote an award-winning poem. As an adult, he received special recognition from L. Ron Hubbard’s Writers of the Future Contest. He has been editor and/or publisher of nineteen news and literary publications, both online and in print, with circulations as high as 770,000. He is an accomplished cook and has two claims he thinks few can match: cooking nearly every type of food on a grill; and nearly being knocked flat when his grill exploded.

He received both his bachelor’s and master’s degrees from Westminster College of Salt Lake City. As an undergrad, he double-majored in communication and philosophy, while completing the Honors Program. As a graduate student, he earned a master of professional communication with a writing emphasis. He was also a high-performing athlete, qualifying for international competition in Greco-Roman wrestling.

He is a communication professor and a nationally recognized wrestling coach. He is happily married to his high-school sweetheart and is father to five children, as well as helping to raise five step-children. He was born in Salt Lake City, Utah, where he continues to live, coach and teach.