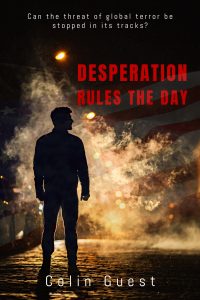 About Desperation Rules the Day by Colin Guest

Synopsis for Desperation Rules the Day

The IRGC, the unofficial rulers of Iran, are in danger of losing control of the country. Given this, they back a terrorist plot against America on Independence Day. Fortunately, a deep-seated mole in the IRGC named Vincent informs Jeff Stone, the leader of a top-secret American anti-terrorist organisation, about the plot. He says it involves a container ship arriving from Panama, then calls to say that a second team of terrorists will come from Panama. After checking all recent arrivals from Panama, the FBI locates the second team. They discover two limos packed with high explosives when they raid a garage. No one knows where to detonate them, but with the Golden Gate Bridge nearby, the FBI suspects this was their target.
In the meantime, a ship due to arrive at the Oakland Port in California from Panama is located. When Jeff and his team land on the vessel from a helicopter, they make a terrifying discovery. Two of the top containers have sliding roofs, with a series of loaded missile launchers fitted inside. Both roofs and rockets are set to be operated by remote control. When informed of this, Nathen Hobbs, a disgraced ex-US Navy captain, is shocked as he thought they contained drugs. He gives Jeff details about Selem, the man who paid him. Jeff sends the details back to base, where they identify the man.

Although Iran is the prime suspect, the president tasks Jeff to obtain proof. Ongoing to Panama, Jeff and George, a team member, they discover the name of the man who arranged the container alterations. They then survive an assassination attempt while the two assassins die.
Jeff and George then head to Brazil, where they learn where the suspect lives. After he goes out, they enter his apartment and confront him on his return. He confirms Iran was behind the terrorist plot and also gives Jeff the name of the man who devised the scheme. Unfortunately, when the three men leave the apartment, an assassin kills the suspect. Still, with the proof the president wanted, Jeff and George return to America. After discussion with the heads of his various security organisations, they agree to target the IRGC hierarchy.
Jeff learns Rezza, the head of the IRGC, will attend a meeting in Byblos, Lebanon. Along with Amanda, a sniper, are two Mossad agents they lay a deadly ambush for those attending.
The group inside the building burst out to make a panic-driven escape. As they approach Jeff’s location, he detonates the bombs placed under their vehicles and then rakes the wreckage with armour-piercing bullets.
Jeff then returns to America and informs the president of their success.

Author Bio:
Colin Guest is an English author living in Istanbul, who until his retirement, worked in fourteen countries on high-class interior projects. Given this, he uses his knowledge of various places he visited in some of his books. Colin has published eleven books, including memoirs, thrillers and romance stories. He recently completed two unpublished romantic novels, An Unforgettable Cruise and, It Happened in Barcelona. Apart from his books, Colin has written film scripts based on two of his thrillers. He is now completing one based on his novel A Dangerous Love Affair.
Colin is passionate about wildlife and has adopted a tiger for the past twelve years.