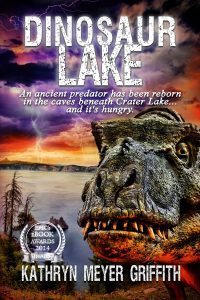 An ancient predator has been reborn in the caves beneath Crater Lake
…and it’s hungry.
Ex-cop Henry Shore has been Chief Park Ranger at Crater Lake National Park for eight years and he likes his park and his life the way it’s been. Safe. Tranquil. Predictable. But he’s about to be tested in so many ways. First the earthquakes begin…people begin to go missing…then there’s some mysterious water creature that’s taken up residence in the caves below Crater Lake and it’s not only growing in size, it’s aggressive and cunning…and very hungry.
And it’s decided it likes human beings. To eat.
And it can come up onto land.
So Henry, with the help of his wife, Ann; a young paleontologist named Justin; and a band of brave men, must not only protect his park and his people from the monster but somehow find where it lives and destroy it…before it can kill again. 572 Amazon Reviews 4.2 star average. 2014 EPIC EBOOKS AWARDS *Finalist*. Dinosaur Lake V: Survivors is now OUT!

Author Bio:
About Kathryn Meyer Griffith…
Since childhood I’ve been an artist and worked as a graphic designer in the corporate world and for newspapers for twenty-three years before I quit to write full time. But I’d already begun writing novels at 21, over forty-eight years ago now, and have had twenty-nine (nine romantic horror, two horror novels, two romantic SF horror, one romantic suspense, one romantic time travel, one historical romance, five thrillers, one non-fiction short story collection, and seven murder mysteries) previous novels and twelve short stories published from various traditional publishers since 1984. But, I’ve gone into self-publishing in a big way since 2012; and upon getting all my previous books’ full rights back for the first time in 35 years, have self-published all of them. My five Dinosaur Lake novels and Spookie Town Murder Mysteries (Scraps of Paper, All Things Slip Away, Ghosts Beneath Us, Witches Among Us, What Lies Beneath the Graves and All Those Who Came Before) are my best-sellers.
I’ve been married to Russell for over forty-one years; have a son, two grandchildren and a great-granddaughter and I live in a small quaint town in Illinois. We have a quirky cat, Sasha, and the three of us live happily in an old house in the heart of town. Though I’ve been an artist, and a folk/classic rock singer in my youth with my late brother Jim, writing has always been my greatest passion, my butterfly stage, and I’ll probably write stories until the day I die…or until my memory goes.
2012 EPIC EBOOK AWARDS *Finalist* for her horror novel The Last Vampire ~ 2014 EPIC EBOOK AWARDS * Finalist * for her thriller novel Dinosaur Lake.