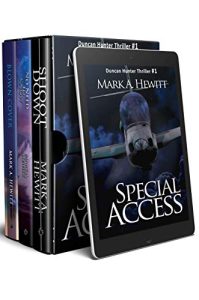 Approved by the CIA Publication Review Board

“Duncan Hunter is a great character… an excellent read.” –A Good Thriller

Author Bio:
My books feature a tangential character—a fictional President of the United States who was elected to office however the two political parties and the media knew from the outset of the campaign that he wasn’t eligible to be President. Collusion, conspiracy, and corruption is at the heart of every book. Both political parties and the media played games of charades with the American people; they had their reasons not to expose the charlatan president. When a contract CIA pilot—who is doing Agency work that previous CIA Directors expressly prohibited—acquires the comprehensive secret file on the President and releases it, all hell breaks loose. In the White House, the Congress, the media, and the CIA. The Duncan Hunter books are based on fighting terrorists while staying out of the crosshairs of murderous political and media power brokers.