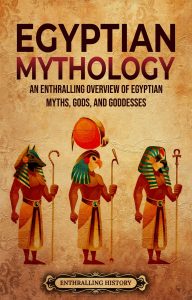 Did you know that the ancient Egyptians believed in life after death? You will be amazed at how hard they prepared for the afterlife!

This book is loaded with stories of the lives of the ancient Egyptians, their gods, and some of the greatest myths in antiquity. The gods played an important role in people’s lives; you might be surprised to see how much they impacted everyday life!

On every page of this book, you will find yourself on an exciting journey to one of the most influential kingdoms in history. On your way, you will learn more about some of the following:

• The origin and foundations of the world from an Egyptian perspective;
• The Egyptian myths about the time the gods ruled the earth;
• The multi-versioned stories about the lives of the gods and goddesses of ancient Egypt;
• The incredible legends in Egyptian mythology;
• The elaborate funerary culture in ancient Egypt;
• The journey to the afterlife from an Egyptian perspective;
• Attributes of the most famous gods and goddesses in the Egyptian pantheon;
• And much, much more!

If you want to explore the fascinating mythology and myths of ancient Egypt, get this book now!

Author Bio:
Enthralling History makes history interesting for everyone. Now you can enjoy history books that will mesmerize you.