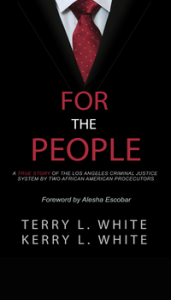 About For The People

A memoir that will impact you like no other…

Over 30 years in the making, this powerful book recounts the high profile cases taken on by two African American brothers, both prosecutors, who brought justice to the courts of Los Angeles and lived through some of its most iconic and notorious events.

Kerry and Terry White were shoved into the spotlight at varying degrees, but despite office politics and public scrutiny, held true to their philosophy of doing what was right, no matter the cost.

And at times, the cost was high.

Some of their most notable cases include: the OJ Simpson and Rodney King trials, the University of California (Los Angeles) body parts scandal, going up against the power of the drug cartels, and holding law enforcement and even fellow prosecutors accountable for their mistakes, biases, and failures.

The decades of experience accumulated between Terry and Kerry White is laid out in this gripping two-part story, which blends a traditional memoir with events of historical significance, set in a Los Angeles that many of us still remember. Readers of True Crime will particularly enjoy this memoir, which approaches tales of criminal activity from the prosecutor’s point of view, leaving us with a sense of hope and encouragement, that there are still good men and women working toward justice, on behalf of The People.

Author Bio:
Terry and Kerry White were born and raised in San Diego California. Terry is a graduate of San Jose State University and UCLA School of Law.  Kerry is a graduate of the University of California at San Diego and UC Berkeley School of Law. The brothers began their legal careers in the early 1980s as prosecutors, taking on cases ranging from drug cartels, OJ Simpson, and Rodney King, to human trafficking and celebrities. They are both avid and long-suffering fans of the San Diego, now Los Angeles Chargers.