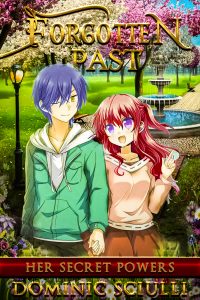 About Forgotten Past Her Secret Powers

A new threat by the name of Layton Prenter escapes from prison, and Liam finds out his family have been hiding some important information from him and his twin sister for many years. He has to get to the bottom of this mystery before it’s too late. At the same time he has to get ready for his first year at Greenspan Academy, and he couldn’t be more excited. Liam is looking forward to learning about a variety of spells, conjurings, potions, and even rituals to summon an amplitude of ghastly spirits and other world creatures. However before he embarks on his trip to the grand academy he is forced to deal with two of his best friends fighting for his love. Even when he ends up finding himself in love with one of them it doesn’t end the feud between the three of them. Meanwhile Andrea has to deal with the fact her father finally moved on. It’s been almost a decade since she lost her mother, but she wasn’t ready to move on, but not that much time passes by until she reunites herself with a woman that changes the course of her life forever. This sets her father and her whole family down a different path, and in the end she may have a happy ending. That happiness wouldn’t last forever.

Author Bio:
Dominic Sciulli enjoyed writing from a young age, and as time went by his writing abilities got better. He hopes you appreciate his work! If you have any inquiries email him at dsciulli55@gmail.com