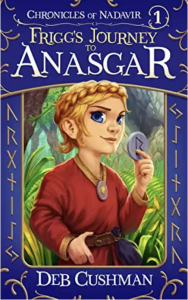 As humans scatter across the land, magical folk find refuge with dwarves inside their mountain colony of Nadavir. This angers the trolls living in the other half of the mountain. When the trolls invade and enslave the inhabitants of the colony, a headstrong young dwarf named Frigg escapes with her friends and travels in search of a legendary dwarf colony of Anasgar, their last hope to save their world.

Is there such a thing as too much adventure?

Seized by ogres! Exhibited in a freak show! When Frigg dreamed of adventure, this is NOT what she expected.

After trolls attack Frigg’s colony, the young dwarf and her friends escape and embark on a perilous journey to locate the legendary dwarf colony of Anasgar for help.

Can a dwarf, a faery, an elf, and a unicorn convince the defiant dwarves of Anasgar to help fight the trolls?

Or will her friends and family be enslaved forever?

Frigg’s Journey to Anasgar is the first book of an exciting new middle-grade fantasy series, Chronicles of Nadavir, that will follow a group of magical friends on journeys of adventure and discovery.

Author Bio:
Deb Cushman is the author of fantasy adventure tales for children and teens. She spent her early years reading and listening to stories and writing her own. She wrote, produced, and directed a historical play in the third grade, and in the sixth grade, she amused her classmates with her adventurous spelling-word stories, which often included commercial breaks and songs.

Her work in libraries at the elementary, middle, high school, and college levels, assisted her in eventually creating a library in a public school of the arts.

Deb is married and has three sons. She loves spending time with her grandchildren. She lives in the Pacific Northwest where the formidable forests, majestic mountains, and blustery beaches provide ample inspiration for fantasy settings. She loves imagining what it would be like to encounter a faery, travel to Narnia, and fight orcs in Middle Earth, so long as she doesn’t have to leave her living room.