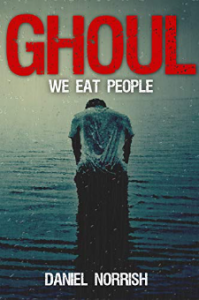 About Ghoul: We Eat People by Daniel Norrish

“Not your usual zombie book.”

The world beyond the forest where Eddie’s family have been hunting and gathering is annihilated. The highways have been stripped of vehicles to allow the massive armies to move more freely and civilisation is a flood of gore. When Eddie fires a pistol into the face of his captor, the soldiers around him just laugh and stuff the pieces of brain back into the shattered skull of their leader. When Eddie attempts to comfort a cowering cellmate, she bites off his finger.

WHAT HELL HAS HAPPENED!?

If Eddie does not show strength, he’ll be consumed by the army that has stolen him from his family. Luckily, his experience as a nomad has given him the skills to lead the army without a GPS or any other extinct technology, and he’ll lure their enemies into horrific, murderous traps.

Now that he’s essential, Eddie is watched by a throng of guards. To escape, he’ll need all his cunning with the warrior skills of his new ally; a terrorist hunting killer with a box of grenades.

Author Bio:
When Dan’s not tapping away on a computer keyboard, he brews black beer and watches rugby. He has a degree in “Professional Writing and Publishing,” as well as Honours in creative writing from Curtin University in Western Australia.

His goal is to produce suspenseful, intriguing crime fiction that propels the reader through engaging landscapes with constant action and unforeseeable surprises. Stephanie Saxon, the protagonist of “The Bodies We Won’t Bury,” is crafted to be foolish and, at times, irritating. Readers might find themselves hating the violent detective as she makes the wrong decisions over and over again, leading to the horrible murders of undeserving innocents. Sometimes, a detective is given more power than they deserve. Saxon is based on an age bracket, so readers might recognise the impulsivity and harsh demeanour of an angry young adult. An angry young adult with a police badge, taser and a secret, unlicensed revolver.

Kidnapping interests Dan more than murder and other crimes, primarily because kidnapping can build more suspense. Are they dead? Are they being held prisoner? In “The Imposter,” thirteen kidnap victims tell the story of their experiences with a masked vigilante. The reader is presented with the perspectives of the captives, most of whom are murdered before they can share their knowledge with anyone other than the reader.

Dan is a disability support worker, and he plans to write a kidnap novel involving a young person with a disability. With his experiences from the field and memories of all the awesome personalities he has worked with, he plans to pump the novel with as much laughter and joy as misery and terror.