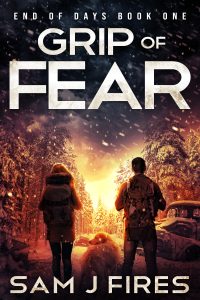 About Grip of Fear

No lights. No power. No help.

During the coldest winter on record, an EMP attack wipes out the nation’s power and cripples the country.

As the city spirals into lawless chaos, investigative journalist, twenty-six-year-old Cassandra Drews is forced onto the dangerous streets of Portland to begin the long walk to her parents’ home in Oregon

But hypothermia and starvation aren’t the only dangers Cass and her rescue dog, Daisy, face on their perilous trek. Danger is stalking them, waiting for the perfect moment to strike. Help comes in the form of troubled ex-marine Isaac Winters, who slips back into soldier mode with the city’s collapse.

Now, the trio must work together in a fight for survival as they race to escape the city before violence, or the bitter wintry storm can claim them. Do they have what it takes to make it out alive? Or will they be crushed by the brutality of the unforgiving cold?

Grip of Fear is book 1 in this brand new post-apocalyptic EMP survival thriller. If you enjoy tales of ordinary folk thrown into harrowing situations, you’ll love the End of Days series!

Author Bio:
I’m a lawyer in my day job. I enjoy working in the law, but this doesn’t allow for any creativity. So I must have a release valve, which is reading.  Psychological thrillers, detective books, and any sci-fi I can get my hands on. Among many other authors, I love Stephen King, Dean Koontz, and Margaret Atwood is one of my favorites. The Handmaid’s Tale is an incredible book, very insightful into human behavior and how people react in extremely stressful situations. It was this book that inspired me to write. I never thought I would have the time, but it’s amazing what you can do in the early hours of the morning!
Since I started my writing career a little over a year ago, I have scoured the post-apocalyptic and dystopian fiction arena for inspiration. My first work was a dystopian
trilogy named ′Scavengers’.  In this short series I wanted to explore the concept, what if when everything is all but lost, scrap becomes a commodity? How would humans survive in such a world? I really enjoyed testing the characters to their limits.
I have since gone on to publish three other series, ′Madness & Mayhem‘, ’Crimson Rage′ and ′Ravaged World’. I am currently working on ‘End of Days’.
I love creating apocalyptic and dystopian worlds, testing the characters, and trying to find their breaking point.
Being a published author has always been my dream. Finally, this has become a reality. But now my ambition is to make this a full-time occupation. The idea of living a laptop lifestyle is very attractive as it will give me the freedom that I have never had to work anywhere in the world, particularly as the whole of my working life so far has been firmly stationed in an office. I live in the northeast of the UK which gets cold, dark, and miserable in the winters. How nice it would be to be able to pop down
to the south of Spain in the winters to work on my books. This way I could kill two birds with one stone and also improve my conversational Spanish!
When I’m not practising the law, reading, writing, or watching Spanish films on Netflix, I like to cook Indian food and chill out in my local coffee shop.
I love to hear from my readers, email me at hello@samjfires.com. I respond to all emails personally. You can also follow me on Facebook: SAM FIRES AUTHOR PAGE