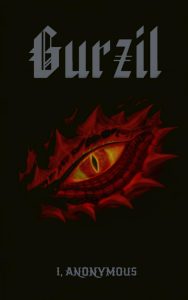 About Gurzil: The Wars Of Wrath Book One

WITH THE FALL AND SACK OF ROME, the barbarian hordes of the east claimed the lands of the Western Empire and brought forth an age of tyranny.

AGAINST THIS DARKNESS, TWO HEROES WILL RISE
THEY COME FROM WORLDS APART
BOUND TOGETHER BY MAGIC AND CURSED BY FATE

ON THE WAR-RAVAGED ISLAND of Britain, King Cedric of Wessex, launches a treacherous blitz attack against the kingdoms of the Romano Britons. Hopelessly outnumbered, the last descendent of King Lear, George of Bertilack must hold the Saxon advance long enough for his sworn enemy, Arthur Pendragon of Camelot, to unite the Britons in common cause.

FAR TO THE SOUTH, in the deserts of Libya, Princess Sabra of Saline fights against a more insidious foe. However, the shadowy cult that holds her people in bondage is more formidable than she realizes. For the god they worship is no idol of dead stone or gold.

HE IS THE LAST of his kind, an ancient evil, a relic of an age when fallen angels and nephilim ruled over mankind. For centuries, he has waited, but now the dragon Gurzil is ready to make his move.

FOR THIS HAS BEEN FORETOLD
AND THIS WILL COME TO PASS

Author Bio:
What follows are the legends of old, as they are told and the history, as it is known.
History records that when Rome fell, the western world descended into darkness. We know little of the time that followed the fall of that empire. The deeds of this age are lost. What few records were kept, have, for the most part, been destroyed by the decay of time and the fires of war. However, there are truths, passed down from that time, that neither flame nor sword could destroy.
What is remembered, is that in a time of greed and contempt, there were those who stood against the darkness.
At times, these heroes were victorious and drove the armies of greed and destruction back to the shadows. However, there were also desperate days when the forces of evil ground the armies of justice to dust. Defeats that left slain heroes, broken shields, and ruined nations in their wake. Yet those who survived the chaos kept the stories of the brave few alive.
Their legends have echoed through the ages.
This is why all have heard of George the Dragon Slayer, King Arthur, and the Knights of the Round Table. Their stories refreshed and renewed constantly over the centuries, while tyrants like Emperor Justinian and the Vandal King Gaiseric are forgotten by all but the footnotes of history.
It is the storyteller’s sacred charge to keep such legends alive.
For when the mighty seek to smudge the heroes out of history; When the chronicler and the journalist record more lies than truth. It falls to the jester, the poet, and the playwright to remind people of the honor of courageous knights, the cruelty of tyrants, and the existence of monsters.
I write to preserve the legends of yesterday in hopes that others to come will record the legends of today.
For tyrants are feared, then reviled, and soon forgotten. Yet, for as long as men and women tell stories, legends will never die!
I am Outis, I am No Man, I am Nemo.
I Anonymous, to the tyrants of today and to the tyrants of tomorrow deliver this warning, passed down from ages long ago. Beware the eagle, the lion, and the bear. For the valiant will resist you.
LOOK. EVEN NOW … THEY ARE COMING FOR YOU!