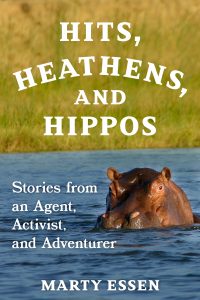 About Hits, Heathens, and Hippos: Stories from an Agent, Activist, and Adventurer

He’s survived a fierce hippo attack and a sting from the world’s most venomous insect, but can he survive an over-the-top father, who prays aloud in restaurants, faith-heals his old Toyota, and believes demons possess his Masonic Lodge watch? Find out in the hilarious new memoir from multi-award-winning author Marty Essen! “Marty Essen’s book, Hits, Heathens and Hippos, takes you on a comedy journey that never ends. It’s a wicked funny ride. And I know funny.”—Karen Pickering, comedian

Hits, Heathens, and Hippos: Stories from an Agent, Activist, and Adventurer is Marty’s sixth book, and like all his books, it reflects his values of protecting human rights and the environment—and does so with a wry sense of humor.

Marty is also a popular college speaker, who has performed the stage-show version of Cool Creatures, Hot Planet on hundreds of campuses in forty-five states.