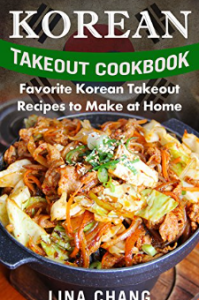 It’s not surprising that Korean food is America’s fastest rising star on the food scene today. It meets this generation’s quest for new, exotic, and exciting gastronomic adventures. Americans are no longer hesitant to try things that are unlike what they’re accustomed to; they’re willing to try new flavors, spices, and textures. Korean cuisine undoubtedly offers all these and more.

It is a diverse and versatile cuisine. For the health conscious, there are also numerous non-dairy, gluten free, and low fat dishes to choose from. Korean food makes use of a multitude of grains, beans, vegetables, seafood, meat, and fruit. Dive into the world of Korean cuisine, and discover that it is so much more than just kimchi!

Scroll back-up and click the BUY NOW button at the top right side of this page for an immediate download!

Author Bio:
Lina’s grandparents immigrated to the United States and opened their own Chinese restaurant in the early 1960s. She is a second-generation immigrant living in New York City, a place renown for the diversity of its food and having some of the best restaurants in the World! She realized at a young age, working in her grandparent’s restaurant, that she absolutely wanted to make a career in cooking industry. She has been cooking for others ever since. She has owned a Chinese fast food restaurant in a large shopping mall for several years before settling down and having children of her own. She now shares her passion about food and eating with her readers in her best-selling series Takeout Cookbook where she presents the best takeout restaurant recipes from a diverse cuisine including Chinese, Thai, Korean, Greek, Indian, Italian and many more.

Lina lives in New York City with her husband and two small children.