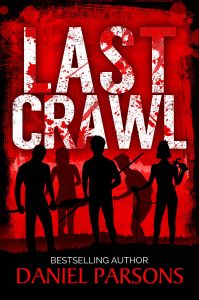 When the undead attack during Milo Callaghan’s first night at university, he and his new flatmates quickly discover a loophole in zombie nature: they can’t see you if you’re drunk. Like, seriously drunk. Will the gang escape the horde, or will their hilarious, drunken antics get them killed on the messiest bar crawl the world has ever seen? Grab Last Crawl on May 11th for only 99 cents!

Author Bio:
Daniel Parsons is a horror and fantasy author who has sold books in over 20 countries. Wattpad has used his zombie stories to promote a major Hollywood movie and his fantasy has topped charts on Amazon, Apple Books and Kobo around the world. Besides writing, Daniel has worked for four traditional publishers and has managed two bookstores where he lives in South Wales, UK. For more information, visit DanielParsonsBooks.com, check out his books online or join his 80,000+ Twitter followers. He loves hearing from readers.