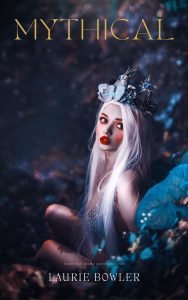 It’s illegal for mythical beings and people to experience passionate feelings. However, laws can be broken.

When Ezekiel is discovered meandering the Elfands, he realises the punishment is death. Frantically, he lies about his character hoping the mythical beings will spare his life.

Jenilia has zero faith in the human, not simply because he communicates in the language of men. Men lie, but in Elvish, lying is impossible. In a snapshot of instinct, Jenilia chooses to allow Ezekiel an opportunity: learn Elvish, uncover his insights, and she will liberate him.

As Jenilia and Ezekiel journey together, they develop a strong friendship and feelings for each other. Ezekiel uncovers a deadly plan which leads to the destiny of the Elflands in his hands. Ezekiel has a decision to either put his life at risk to save the Elflands and the mythical people who despise humans or walk away and return home.

Author Bio:
Laurie enjoys writing and shares her vivid imagination with all the readers who purchase her books.

Once Laurie had a dream to become someone that may be remembered, her dream has become a reality. Laurie's vivid imagination is here to stay.

Add Laurie as your favourite author.