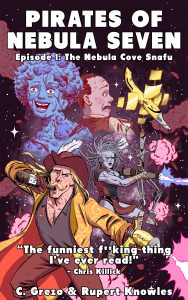 About Pirates of Nebula Seven – Episode I: The Nebula Cove Snafu

Captain Starlight may just be the greatest pirate in the galaxy, or possibly the worst. It’s a divisive issue, with Starlight on one side, and everyone else in the known universe on the other.