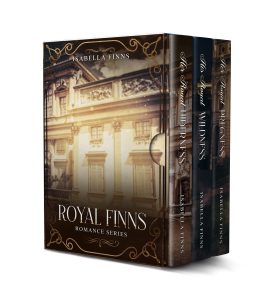 One princess in hiding plus one reluctant stranger equals a sexy royal romance.

Hair in a tight bun with big eyeglasses and a shapeless ugly colored dress on me I do not look at all like the normal me, a crown princess, and a future queen. I had to put on this disguise and escape a scandal after I broke my engagement with a childhood friend, a duke, who turned out to be a betrayer. And in New York, no one would recognize me and know about my humiliation.

That was a good plan but did not take into account that I might meet someone who would confuse my thoughts and lit me up in a wild, passionate and definitely forbidden way. And that is exactly what Alexander did to me. At first, he did not want to have anything to do with me, a girl who looked like a wallflower and the total opposite of the kind of girls he usually dated. But there was something that made both of us restless.

I knew that with his questionable reputation he was totally unsuitable for me. My parents and my people would never accept him, an American playboy, the total opposite of what they wanted. A short time of secret passion was all we could ever have. Or was it? Could there be a happily ever after like in fairytales for him and me, a royal princess?

One broken-legged prince plus one strict professional equals an unwanted love affair.

Quite too often I have been told that my lifestyle is too dangerous and risky for a royal prince. Maybe, but I just love rally driving, hang gliding, and cave diving just to mention a few. Then one day the warnings became true. Due to black ice, I lost control of my rally car and ended up at the hospital with a broken leg. Damn it! And not only that, but I also had to endure the anger of my former quite too demanding lady friend. That was when I decided that relationships are not for me.

My thoughts change when I see the woman who has been hired to take care of my rehabilitation. A tiny woman with bright green eyes and freckles the only big thing in her besides her enormous red hair being her plump breasts. What a creature!

When I touch her, she pushes my hand away. She must have seen the hunger in my eyes and the effect on my crotch as she tells me that my father, the king, had warned her of me. She makes it crystal clear that no physical contact except what is professionally needed will happen between us. Well, I am not going to act like a stupid and lustful teenager. There is plenty of other fish in the ocean.

Then how can it be that I cannot stop thinking of her and dreaming of her?

One princess in distress plus one brave bodyguard equals an accidental pregnancy.

My siblings, a crown princess and a prince say that as the youngest child I have been pampered. Maybe I was until came the day when I certainly was not getting what I wanted. My bodyguard who had been with me since my birth was going to quit. How could he who had been like another father to me abandon me like that?

And yet he did and was replaced by a man who looks like a Viking God and has an obsession to save damsels in distress. But I was in no distress and in no need of a savior and in irritation told him so. He just laughed.

Then one day I faced danger, and he had to save me. As a consequence of that, I am now in real distress, pregnant and alone, and there are no saviors in sight. What a scandal! A princess carrying a child without having a ring on her finger! But how else could it be as the father of my unborn child is nowhere nearby and totally unaware of what has happened, and so shall it be.

But how can I ever tell this to my parents, a king and a queen, and face the curious and gleeful public?

Author Bio:
Isabella Finns is a romance author. Her new novel is Her Royal Hiderness. She writes contemporary romances in English and historical romances in her native language Finnish. She has also written numerous historical plays for her own theatre.

In her earlier career, she has traveled around the world and learned about different cultures and fascinating locations.

She is a happy mother of two and grandma of five. She loves to take long walks by the riverside of her hometown in Finland.