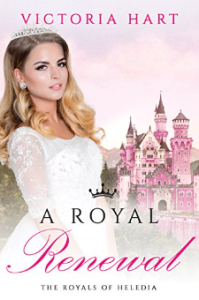 About ROYAL ROMANCE: A Royal Renewal (Letters from a Prince Book 3) by Victoria Hart

A princess like no other… This sweet, clean, and wholesome royal romance story will make your heart melt and keep you reading from the first to the last page.
Download FREE with Kindle Unlimited

Cassandra might be a little introverted, but otherwise, she’s a basic American teenager. Except she’s not actually American, or basic.

Cassandra is the daughter of Isabelle and Nikolas… and niece of Queen Sonia of Heledia. And yes, she is the heir to the throne.

So, when Cassandra graduates from her Washington high school, she doesn’t go to an ivy league college. She boards a plane to Heledia, where she will attend university and learn her role as Princess Casandra.

But it’s not quite what she expected. There is unrest in the country, and a faction of rebels is dedicated to removing the monarchy. It’s a bit of a shock to Cassandra to realize what that means to her personally.

She’s not alone, though. A handsome young man named Carlo befriends her, and she comes to rely on him. Well, that’s until she finds out about his past…

Can Cassandra learn to trust again? Should she give her heart elsewhere? Can she work with Carlo to end the threat to her family, her people and save her own life?

Author Bio:
Victoria was born and raised in New Zealand. She studied literature in England before settling down in Australia with her family.

Her debut novel Letters from a Prince in the series The Royals of Heledia was released in November 2016. She is now working on a follow-up book in this series. You can follow Victoria on her Facebook page: https://www.facebook.com/Victoria-Hart-359538327723831/