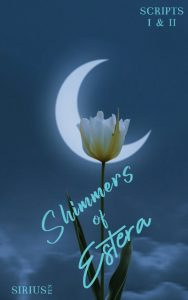 About Shimmers of Estera: Scripts I & II

Little Estera Hubert, is an only child of a single mother, despite being hurt by her own home, the colourful village that treats them as the wretched, all she could do is ask herself why.

Despaired by her biggest question, she still finds hope from the light within her dearest Mama. But the lost truth is shattering away that light and to protect her dearest, the little girl must resolve to risk it all on an ominous journey, to free her mother.

The book will be free on 25th May till 27th May. Have a blissfull time, Thank you.

But after amassing the necessary skill and building a project up to its later alpha stages, then it happened, the twist. It turns out, video game development requires much, more resources than just skill to make a game that’s at least interesting and the only way around it, is to make something that’s just rushed or meh …!

Oh no! The nemesis! The game must be stopped, why? Because, Sirius Pen feels like the legendary designer Shigeru Miyamoto-san used to say ” If it’s not interesting, then why make it?”

But luckily for Sirius Pen, Sirius Pen had been working part-time on something, writing a story, which is both fun and exhausting. Then it got scrapped, because working on both games and writing is, well overkill and ridiculously daunting. In 2020 that story was axed, but with nothing else, interesting enough to turn to, Sirius Pen took the pen! No, wait! Sirius Pen meant … the smartphone!

After game development was halted in June and the year 2021, writing began, again with the terribly named story ” The girl who helped”, then it got changed to “Estera” and later “SHIMMERS OF ESTERA” and later divided into five parts, what can I say, that little child of a book grew way too fast on countless gruelling revisions that made Sirius Pen sick, well not that dramatically sick, just burnt out, posture stuff, some days of fever and some canker sores, one of which that lasted for about three months, it’s nothing really.

Fast forward, April 2022 here we are, Sirius Pen had finished the first two parts of the book and got them published, finally, Sirius Pen has made it to Sirius Pen’s debut as an author!

P.S.
Sirius Pen hopes you will enjoy this story that tells the journey of little Estera. Thank you!