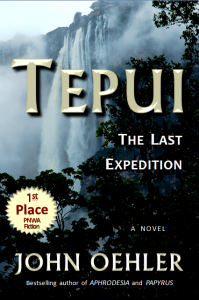 About TEPUI: The Last Expedition by John Oehler

FIRST PLACE WINNER in the coveted PNWA competition. Tepui is a tale of adventure, terror, and forbidden love.

Jerry Pace, a struggling young botanist, reluctantly agrees to accompany his best friend deep into the Orinoco to retrace a doomed, 1559 expedition from which only 6 of 46 explorers returned.

But the Venezuelan wilderness does not forgive intruders. Battered and broken, they reach a remote Catholic orphanage where the old prioress warns of death awaiting any who would venture farther. But an exotic Indian girl leads them on, through piranha-infested rivers and jungles teaming with poisonous plants, to Tepui Zupay–the forbidden mountain no outsider has set eyes on since the Spaniards met their doom.

This is a story about life’s surprises–the challenges, risks–and how they transform us.

John has spent much of his life overseas, beginning in 1966 with two years as a Peace Corps Volunteer in Nepal. His time in the Himalayan kingdom immersed him in a culture of Hindu gods and Buddhist monks, gave him breathtaking opportunities to trek into the high mountains, reduced him to a scrawny 150 pounds, and ignited his passion for foreign lands.

Upon returning to the United States, John went to work for a major oil company, first in research, then in international exploration. The latter took him to about fifty countries and fueled his writing with quirky characters, exotic settings, and cultural contrasts. That travel also took him to some of the world's most remote and dangerous places.

John also has an abiding love of animals, strong interests in art, history, and science, and a hunger for challenging experiences. His novels reflect those interests and his background, as he interweaves high adventure with art, archeology, science, and history.

His other novels include EX LIBRIS (also a First Place winner), PAPYRUS (a Semi-Finalist in Amazon's first Breakthrough Novel competition), and APHRODESIA: Death by Passion,.