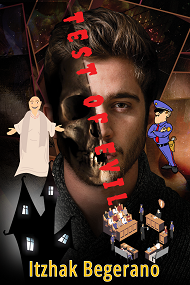 About test of evil by itzhak begerano

Test of Evil (based partly on true events) 294 pages

Test of Evil is based partly on real events that took place in our time, in any well-known and ordinary country and city. This is an evil and deceptive psychological thriller about the heinous and shocking primal murder of a child whose only depravity was his very existence. evil dark intentions caused the murder of the child and the piling up of his intentions in front of the police who stubbornly and patiently examine and investigate to catch the perpetrator of the murder.
Test of Evil pushes readers into the social fallout resulting from the murder of seven-year-old Isaac Manis. As an investigation into his wrongful death ensues, the terrible forces of deception and manipulation challenge the virtues of truth and justice in a seemingly “upright” society.
After seven-year-old Yitzhak Manis was kidnapped from his home and murdered, Lieutenant Michael “Mickey” Holmes, a detective specializing in unsolved crimes, is assigned to investigate the case. Soon, Mickey finds himself entangled in a complex narrative woven by unknown hands. As the pressure mounts by the minute, they pin the blame on Joshua Solomon, a mysterious leader of a nearby religious cult with a long record of child abuse. Although Solomon appears to be a prime suspect, Mickey’s deputy, Wally, does not seem convinced. The investigation continues as Solomon awaits trial. Meanwhile, the investigators look inward to discover the truth about young Isaac’s private life. A child of a broken home, Isaac’s environment is dysfunctional at best. His father, Avraham, treats him with extreme resentment. His stepfather, Gideon, sees him as nothing more than a nuisance. Suspicion begins to brew in the minds of the investigators as they uncover clues about the past lives of all the suspects. Could these revelations be the key to uncovering the truth, or are things really as they seem? Eventually, Solomon was accused of the crime. All efforts to clear his name turned out to be invalid. Just as he prepares to receive punishment,and the terrifying truth is revealed. The story is told in a series of quick scenes that heighten the tension and take the reader to a tense conclusion.Test of Evil is a novel that illustrates a clear picture of a society full of repulsive, indulgent, and psychotic characters. Perfect for lovers of intrigue, thrillers, suspense, and murder mysteries, this is a book recommended to all thriller and thriller lovers as it sheds light on the darkest and most hidden parts of polite society..

Author Bio:
Itzhak Begerano – kim72816@gmail.com
I am a disabled author and screenwriter with a penchant for writing psychological thrillers, Drama, Comedy, Fantasy, Science fiction, and Satire. I studied Directing and Screenwriting at the prestigious College of Film and Television in Israel. I’m now retired, but still write as a hobby while living with his wife and four kids in Israel