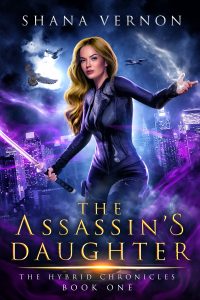 About The Assassin’s Daughter

…but there’s something she doesn’t know.

Will learning the truth cost her everything?

Lenna entered the guild under a secret identity because if they found out who she really was, it could get her killed.

But she had no choice.

She had to find out what happened to her father.

As they each learned about their powers and the world of rogue vampires, the stakes grew. Lenna couldn’t afford any romantic distractions. Cade, her instructor, though, was hard to resist. It wasn’t the first time they had met and if he recognized her, it could be deadly.

She was willing to risk everything…

…but finding her father wouldn’t be easy.

Something was going on at the Guild and she needed to get to the bottom of it. There was only one chance for Lenna to get answers and the odds were against her.

Could she count on her new friends?

You’ll love this diverse cast of this new series, because this Adult Urban Supernatural Fantasy, has wonderful characters you’ll adore.

Author Bio:
Shana is a full-time writer and mother of triplet boys.

​When she isn’t writing fantasy novels or taking care of her kiddos, she is reading, exercising, experimenting with cooking, or traveling around the world.