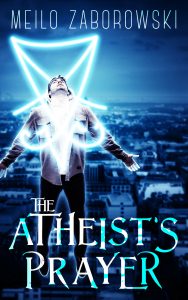 About The Atheist’s Prayer by Meilo Zaborowski

The operative word to “functioning alcoholic” is the “functioning” part. I think I do a decent job, if I do say so myself.

But my senior year of college was never supposed to go like this. My dad’s health is in the tank, and my boyfriend breaking up with me…kind of tipped me over the edge. I may or may not have gotten sloppy drunk and actually prayed for help, but I definitely got way more than I bargained for: an angel—or at least that’s what he calls himself—asking for my help.

So somehow I’ve gotta help this angel help me, but when a string of suicides follows in my wake, I start to question everything. Everyone I care about is in danger; can I salvage anything good from what I’ve done?

Warning: This novel is intended for adults and mature teens as it contains realistic depictions of life as a modern day college student, including but not limited to alcoholism, drugs, sexual assault, self harm, suicide, terminal illness, transphobia, homophobia, and racism.

Author Bio:
Texas native Meilo Zaborowski is the first-time author of The Atheist’s Prayer. Cursed with an overactive imagination, Meilo began writing fanfiction at the age of twelve and turned to original fiction after high school. Meilo spent far too much time pursuing a BA in English from University of North Texas, graduating in 2014, instead of focusing on his novels, but he finally got his act together to publish The Atheist’s Prayer at the end of 2020. Since then, he’s been torn between landing a decent paying job and pursuing his love of storytelling.

When he’s not at his day job, or furiously writing or revising his novels, Meilo can usually be found at home crocheting, crafting something out of garbage, DIYing something that has no real reason to be DIYed other than the fact that it’s cheaper that way, or vegging out with a cat in his lap while watching adult cartoons. Maybe with a bowl of ice cream in hand.