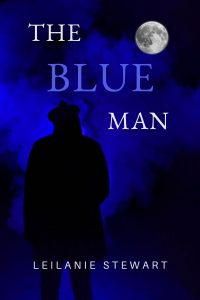 About The Blue Man by Leilanie Stewart

Twenty years ago, horror loving Sabrina told her best friend, Megan, the terrifying Irish folk tale of the Blue Man, who sold his soul to the Devil in vengeance against a personal injustice. What should have been the best summer of their schooldays turned into a waking nightmare, as the Blue Man came to haunt Megan. Sabrina, helpless to save Megan from a path of self-destruction and substance abuse as she sought refuge from the terror, left Belfast for a new life in Liverpool.

Twenty years later, the former friends reunited thinking they had escaped the horrors of the past. Both were pregnant for the first time. Both had lived elsewhere and moved back to their hometown, Belfast. Both were wrong about the sinister reality of the Blue Man, as the trauma of their school days caught up to them – and their families.

Why did the Blue Man terrorise Megan? Was there more to the man behind the urban legend? Was their friendship – and mental health – strong enough to overcome a twenty year curse?

Author Bio:
Leilanie Stewart is an author and poet from Belfast, Northern Ireland. Her writing confronts the nature of self; her novels feature main characters on a dark psychological journey who have a crisis of identity and create a new sense of being. She began writing for publication while working as an English teacher in Japan, a career pathway that has influenced themes in her writing. Her former career as an Archaeologist has also inspired her writing and she has incorporated elements of archaeology and mythology into both her fiction and poetry.

In addition to promoting her own work, Leilanie runs Bindweed Magazine, a creative writing literary journal with her writer husband, Joseph Robert. Aside from publishing pursuits, Leilanie enjoys spending time with her husband and their lively literary lad, a voracious reader of sea monster books.