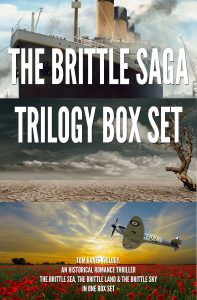 Set in the early 20th century, against the backdrop of the Titanic disaster, ‘The Brittle Saga Trilogy’ is a captivating, inventive read, with dark & sinister characters and a gripping storyline.
Magda Asparov, a young woman from Ukraine, is bound to marry Matthew Turner, a shrewd and unscrupulous American businessman. But her journey to America is cut-short when the ship she is travelling on, the Titanic, hits an iceberg and sinks.
Magda loses her memory and a new personality, Maggie, takes hold. Richard Blackmore, Captain of her rescue ship, falls for her. What follows is the hunt for Magda by Turner’s evil henchman, William Harker, who aims to succeed by any means, fair or foul.
The ensuing search leaves Richard Blackmore as collateral damage.

Author Bio:
As a child, Tom Kane’s family always insisted he was born in the corner of the living room, behind the TV. That strange assertion, true or false, seems to have set the tone for the rest of his life.
Kane’s mother inspired him to write. Science Fiction, in the form of Doctor Who and Isaac Asimov inspired his love of the genre. Monty Python inspired him to be silly and he continues to blame Billy Connolly for his infrequent bursts of bad language
In the corner or behind the TV, what is officially known about Tom Kane’s birth is that it took place in England on a dark and stormy night.