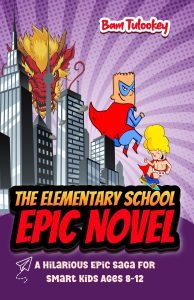 ✔ Hilarious ✔ Exciting ✔ Rewarding (Launch Day Offer – Get It FREE – Oct. 2nd & 3rd 2022)
★ This mischievous book could be your kid’s cherished childhood memory.
✔ 5 Irresistible Things For Kids:
★ Laughs ★Thrills ★Suspense ★1Bonus Jokes Book ★1Clever Quest = 2 Cool Rewards = Solving it PROVES you are smart
★ The Latest & Hottest Kid Superhero Adventure
★ Coolest illustrations, easy & fun read for reading habit
★ “Gosh!Couldn’t get him to put the book down.” – Sandra G (parent, USA)
★ “She was giggling so much, that I felt like reading it too.” – Sam V (parent, USA)
★ Lotsa gadgets and crazy scientific inventions too, in there!

The story: ♥ Harry and Blackberry belong to the same class, are arch enemies and they both hate the evil vice-principal Mr. Zibang. When Harry’s favourite teacher Ms. Mini exclaims, “Verrrrrry Naughty!” at what Blackberry did, a hilarious contest of pranks begins between them. Then come the twists when super villains enter the school. And guess what, someone unexpectedly turns into a superhero! Total madness! And his super power? It’s just crazy, something you just can’t imagine, totally funny. And hey, there’s also a Monkey-Man. Everybody except the Monkey-Man knows he is the Monkey-Man!

♥ One early reader’s opinion: “Hilarious and exiting. Go ahead and gift it, my guess, the Epic Novel is going to catch up big time with the kids.”

Author Bio:
Author Bam Tulookey is Amazon's No.1 best selling children's book author.
Bam's a dreamer with the heart of a kid. As a kid, he always thought he was a superhero. And? And what? He still believes that, only, it remains to come back to him somehow, he chuckles.
Once a huge lion at the zoo decided, for some still unknown reason, to pump a jet stream of pee directed right at Bam's face, when, his life took a turn! He was all of five years then. That day, everybody around laughed at Bam's flabbergasted expression, but after that day, Bam says, he's become very creative somehow. Now, please don't try that at home (rather, at the zoo).
As a kid and while growing up, Bam exhibited talents in Theater, as a Stage Magician, Stand Up Comedian and a Music Composer, among others. Yet he was one kid who got properly thrashed and punished at school. He was a misfit all the way until he realised he would be himself and take mischief to be his main occupation at school. And then, strangely, he lived happily ever after… well, almost.
2 MBA degrees later, he turned a music artist, a Tarot Card reader, a popular FM radio presenter and finally an author writing crazy stuff for kids and amazing thrillers for adults as well.
Bam thinks that thinking is for thinkers, but by thinking that, one might he is not a thinker and this, Bam thinks, is an unthinkable blunder, because only beyond thinking is living.