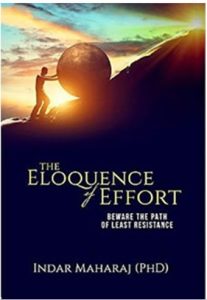 About The Eloquence of Effort: Beware the Path of Least Resistance

The contents of The Eloquence of Effort are deeply moored in the principles of Entropy: the tendency of all things/events to spontaneously degenerate into chaos, unless, of course, there is an infusion of human energy aimed at reversing the downward spiral. It is a universal law: chaos occurs spontaneously; solutions demand conscious effort.
Have you ever wondered why things naturally break up, breakdown, degenerate, depreciate or simply fall apart? Why is Alzheimer’s more prevalent among the lesser educated? Why is physical exercise a vital component to a healthier lifespan? Consider two cars, an old and a new, abandoned under similar conditions. Revisited a 100-years later, the new would deteriorate while the old would disintegrate into untraceable dust. But why not the reverse? As the new car aged into a rusted rattle-trap, the old retrogressed into a spanking new car. Just the way the universe operates, you exclaim. Answers to these questions reside in the forces governing Second Law of Thermodynamics, sometimes referred to as the Law of Entropy. You see, to prevent being submerged under an Entropic tsunami of destruction one must apply personal effort. Failure to do so, can only result in personal catastrophe: disorder/chaos according to this law.
Arguing that dreams are only achievable through sustained effort, the book relies heavily on biographical, philosophical, economic, religious, historical and scientific data. Accordingly, work is the mission; the multiple rewards are the byproducts. More significantly, the pleasure resides in the effort, not the outcome. Against the dark backdrop of malignancies inflicted on society by unrepentant leeches, the benefits of unstinting diligence are sharply focused. The reader is nudged into a higher plane of reality: namely, purposeful effort is rewarding. Hence, regardless of the end-result, effort is never wasted. Conversely, indolence is the bane of progress: the root cause of socio-economic crimes and social chaos. Indeed, corruption in all its diabolical forms is nothing but laziness masquerading as diligence.
Analysis of biographical data sustains the thesis that hard work extends life; indolence shortens it. Moreover, indolence in all its fiendish forms is causally related to personal chaos. The despicably indolent degenerate, Pablo Escobar, attests to the veracity of the statement when he prophetically asserted that, “no drug dealer ever died of old age.” He was right: at age 44, he was slaughtered.
The persuasiveness of the arguments is supported by a wealth of references. Together they form the final authority; they lend credence to the arguments provided.

Author Bio:
The writer is a Canadian national currently residing in Toronto, Canada. An alumnus of the University of Toronto, he graduated with a PhD before joining private industry as a research scientist. In addition to experimental work, he has lectured extensively on Microbiology, Pharmacology and Nutritional Sciences in Toronto.
To extend his vistas, he has spent four years in China. Among some of his activities were lecturing on Critical Thinking and Human Physiology.
He lives by the credo meaningful effort is never wasted. In this regard, he has delivered presentations on Personal Entropy, Entropy and the Environment and The Eloquence of Effort to interested groups. Currently, he is on the Science Advisory Panel of the Green Think Tank, an organization dedicated to environmental issues.
In addition to authoring several scholarly papers, he has been the recipient of several prestigious scholarships during his tenure as a graduate student.