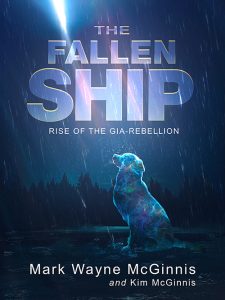 About The Fallen Ship

Moving on from the trauma of combat in Afghanistan, former Green Beret, Captain Sam Dale had just begun to settle down in his hometown of Castle Rock, Colorado. Now the owner of several small businesses, he was unaware that his world was about to be turned upside down. The call came in at 2:30 am. The skies outside had opened up, unleashing a torrential rainstorm. Sam’s small towing company was being tasked with the retrieval of some kind of crashed aircraft.

At the site and up close, Sam soon suspected this was no ordinary aircraft, could it be . . . some kind of small alien ship? And that’s when Sam came face-to-face with the pilot—one who went by the name of Cypress.

Sam would soon learn that a massive fleet of warships originating from the planet Naru had recently jumped into the Solar System. Soon, the initial stages of terra-displacement would ensue—the ravishing of Earth’s natural resources and genocide of the human populace. Sam and Cypress discover their goals were more aligned than expected—deciding to work together, albeit reluctantly. First up, recruit an army of local townsfolk. Unfortunately, too few of them were only marginally acceptable—others were downright misfits. While it was time to defend a now totally isolated Castle Rock, it was also time to play offense and take the battle to the alien fleet up in space. Sam would now have to become the man he had fought so hard to leave in the past. That decorated Green Beret, the one with killer instincts and combat skills like few others.

And so, the epic interstellar saga, The Fallen Ship, begins . . .

Author Bio:
Mark McGinnis
Mark grew up on both coasts, first in Westchester County, New York, then in Westlake Village, California. Mark and his wife, Kim, now live in Castle Rock, Colorado, with their two dogs, Sammi, and Lilly. Mark got his start as a corporate marketing manager and then fell into indie-filmmaking—Producing/Directing the popular Gaia docudrama, ‘Openings — The Search For Harry’. For the last nine years, he’s been writing full-time and with thirty-four best-selling novels under his belt, he has no plans on slowing down.

Kim McGinnis
Kim grew up on air force bases in Okinawa, the Philippines, Georgia, and Arizona. After college, she moved to Los Angeles and became a SAG actress, performing in several theatrical productions. Kim also landed many principal roles in national tv commercials. After meeting Mark in Southern California, she produced and starred in their independent feature film, Openings, the Search for Harry. Kim has extensive advertising experience and currently does all the marketing for their publishing business, Avenstar Productions.