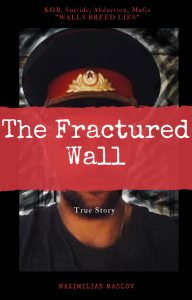 About The Fractured Wall

When Oleg Maslov made an off the cuff comment about the state of the economy in the former USSR, he had no idea it would trigger a chain reaction that would bring him under the scrutiny of the KGB. Little more than a teenager at the time, his words would go on to haunt him for years.

This story draws its origins from the real-life drama of the Maslov family and their efforts to escape persecution in the former USSR. It was a trying time in that country and the Maslov’s were just one family among many to fall foul of the all powerful State intelligence machine.

Using the Russian mafia as its proxy, the KGB implemented the kidnapping of Oleg’s six-year-old son in an effort to get the young father to conform to the desires of the state and some of its operatives. Having been persecuted for years by the security services, that was the last straw for the Maslov family. They knew that they had no choice but to flee their homeland and build new lives for themselves.

Author Bio:
Apart from writing this book, I’m a father of two, and work in the medical field. I was inspired to write the novel for my children, so they have an understanding of where I came from.