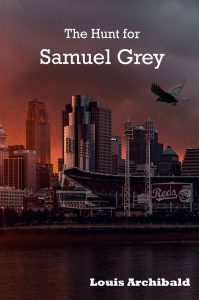 About The Hunt for Samuel Grey by Louis Archibald

Samuel Grey had a long and distinguished career as a detective who specialized in magical crimes. However, during the last two years, he had become more and more fixated on one particular criminal, the notorious Wizard Lilith. While her magical prowess could not be debated, Lilith was a traitor and rebel and had her named tied to every conspiracy, every dark plot, every shadowy attempt to undermine the peace and tranquility of the global empire.

Of course she stood no chance of success, The Emperor was immortal, infinitely wise, and
unassailable. Lilith was nothing more than an annoyance. A tool the empire could use to strengthen her defenders. A fairy tale parents could tell their children to make them behave.

Lilith was successful. Killing the Emperor on the bridge separating Cincinnati from Kentucky on live TV in full view of the entire world. The world fell apart almost overnight. The Emperor was a thousand yea rs old and immortal, so there was no line of succession, no plans at all for what the world would do without him. Factions fought, cities rioted the peace and tranquility that was to last forever, fell apart before the Emperor was even
cold.

Today, Grey woke up in Cincinnati with the worst hangover he had ever had. He was alone in a hotel laying on the floor with a bottle of booze, an eye patch over one eye, and a fake eye staring back at him. His memories were scrambled, and none of the ones he had explained his current situation. He needed to piece together what happened to him, make Lilith pay for her crimes, and keep the warring factions off his neck.

With little more than his old notes, allies he hardly remembers, and a bread trail left to him from Lilith herself, Grey dusts himself off, and attempts to finish the job he already failed.

Author Bio:
Louis Archibald was born in the beautiful and rather isolated Adirondack Mountains. After graduating high school, he enlisted in the Marine Corps, then moved around the country for a while, before settling in northern Kentucky, in view of Cincinnati Ohio. Louis is currently employed in IT and spends much of his free time either playing or managing dungeons and dragons games with friends and family.