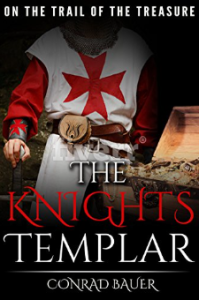 About The Knights Templar: On the Trail of the Treasure (History of the Knights and the Crusades Book 2) by Conrad Bauer

The Knights Templar treasure is one the World’s most enduring mysteries. Is it a myth or a reality? Where could it possibly be hidden?

The Knights Templar existed officially for less than 200 years. Founded to protect pilgrims who were traveling through the Holy Lands, their rise to power was sudden. They became some of the most feared warriors in the region, they had a mandate from God, they controlled perhaps the world’s first real banking system, and they waged war against anyone who tried to wrestle Christianity’s holiest grounds from the control of the Catholic Church. Within their short lifespan, they quickly became one of the most powerful societies in Europe, if not the world.

Full of incredible turns of events including secrets, deceits, lies and betrayals, the history of the Knights Templar from their triumphant conquests to their abrupt fall still fascinates. But nothing comes close to the stories surrounding the mysterious hidden treasures the Knights Templar have accumulated during their short existence and the relics they protected.

This book is a guide to the Knights Templar’s and possible locations of their mysterious treasure. Questions answered include:

•How the Templars built up their wealth and what influence it has even on banking systems of today?
•Is the treasure real and what could’ve happened to it?
•What are the possible locations of the treasure today?

If you want to know even more after reading this book – we’ll help you find the resources to search out your own answers, via the reference section at the book’s end.

Scroll back up and click the BUY NOW button at the top right of this page and start reading now!

Author Bio:
Conrad Bauer is retired mathematics professor. He has always wanted to write books about subjects that fascinate him, mainly mysteries of the universe, unexplained phenomena, mysterious organizations, conspiracies, and anything where the truth is not evident. He now writes full time and put lots of effort researching unexplained events and organizations around the world, trying to shed more light on his chosen subjects.

Conrad lives in England with his wife and two Irish setter dogs.