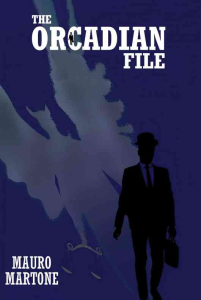 About The Orcadian File

Stephen “Monty” Montgomery is a lonely city-based lawyer; who, despite being skilled in legal debate, is nowhere near to being offered a partnership by his firm. Out of the blue, a spiritless Monty is faced with compelling evidence of an age-old supernatural struggle between celestial entities and their arcane human disciples, forcing him to rapidly adjust his beliefs.

Finding himself called upon to represent ex-police officer Christopher Forsyth, a somewhat languorous Monty soon realises that has become neck deep in a bizarre supernatural conflict. Forsyth had previously been involved in a deniable investigation into an alleged paedophile ring among the establishment, which resulted in his commanding officer being gunned down in the street. Since then, Monty’s new client has been railroaded out of the police and now finds himself in their custody on a trumped-up murder charge.

Monty has to deal with the early court diets, source and build a team of junior and senior counsels to lead the charge against a faceless and politically ambitious conspiracy. One which is quite prepared to destroy anything that gets in its way, requiring the defence team to commit every gram of their abilities to saving Forsyth. What Monty hasn’t reckoned upon however, is being brought face to face with an immortal enemy – one more diabolical, cunning, and dangerous than any human conspirator.

Martone revives his haunting Kertamen tale with this compelling and astute thriller, which is full of moral complexity and legal intrigue. Told with ceaseless imagination through a sharp and intense narrative, The Orcadian File effortlessly meanders between ancient and contemporary judicial mischief.

Author Bio:
Mauro Martone was born in Glasgow. Part Scottish Italian on his maternal side and part Persian (Iranian) from a Zoroastrian family on his paternal. He was raised between Edinburgh and the East Neuk of Fife and attended school in the north of Scotland. He has likened this to: "Boarding at a cross between Downton Abbey and the Overlook Hotel." He would later study under the British historian and writer – Donny Gluckstein, whilst taking A-level history and politics. He was also lectured on Scottish History by the poet, writer and broadcaster – Stuart McHardy, in a "Dickensian" classroom within Edinburgh Castle. Martone regards himself today as a non-denominational Christian with Anglican leanings and "good friends within the Church of Scotland ministry." Friends who Martone studied divinity alongside at New College on the Mound, and who "always make me welcome within the Kirk." He got his MA (with honours) from the University of Edinburgh where he read Ancient History and Classical Archaeology at Teviot. He additionally read Christianity, Hebrew, and a History of Christian Social Welfare within the UK & USA, at New College. He volunteers as a classroom tutor to young offenders and adults with substance dependencies and keeps rescue dogs that have been abused.