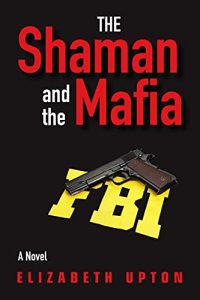 About The Shaman and the Mafia By Elizabeth Upton

Marietta Collins, a former nun, becomes enmeshed in the tragedy of a brutal murder. Marietta, now the head of a youth drug rehab center, is dedicated to ridding the community of the growing criminal element.

The victim of the suspected mafia hit was her friend Joseph Gleason W, a drug informant. During the course of the investigation, she meets the victim’s brother, FBI assistant director Raymond Gleason. There’s an instant attraction between the two. He becomes her first lover and their romance blossoms into a deep love for each other.

Raymond gives FBI agent Jerry Young, who is also his best friend, the responsibility of investigating the murder and hunting down the mafia’s kingpin. Marietta and Jerry have a brief of a clandestine affair they are both later sorry for.

Jerry, haunted by guilt for his violent past, turns to his childhood mentor, a mysterious Cherokee shaman, to save him from the burning fires of lust and his desire for vengeance. Also involved in the search for the murderer is Detective Riley, a tough, trash-talking female cop formerly with the NYPD, who discovers her new boss, Sgt. Sorrento is on the take from the mob.

While other minor characters help tell this gripping story, this is an action-packed mystery and love story that also examines the conflicted emotions of the characters as they try to make sense of their lives through the web of crime, darkness, and light.

Author Bio:
Elizabeth Upton is an American Author and an influential writer of fiction and nonfiction spiritual books.

Her best-selling books, "Secrets of a Nun: My Story" and "The Silver Woman of Fire" helped set her firmly on the world's literary map. With many novels to her credit, she has released a new book in June 2022 titled 'Lovers' Secrets and Revenge.' Elizabeth's favorite she enjoyed writing is, 'The Shaman and The Mafia,' as she shares, "The creation of this story has been an exciting journey. If possible, I would love to meet all of the characters in this book in real life." Elizabeth's books and novels are available on Amazon online, Barnes & Noble, and featured on fine literary book sites.

Elizabeth was born and raised in Los Angeles, CA., until the age of sixteen, when she entered a New York State Convent and became a nun for twenty years, but she yearned for a more authentic spiritual life. Elizabeth left the convent and chose to attend and receive her B.A. from Syracuse University.

Moving back to her native state of California, she attended and received her M.A. from Chapman University in psychology. The Author began working for over thirty years in family counseling as a social worker and probation officer working with troubled teens and abused children. She is a speaker, spiritual mentor, and advisor.

Elizabeth is happily married and enjoys writing books for her reader fans around the world. When the Author is not writing, she works out with a personal trainer to stay fit and healthy; she loves spending time on long walks on the beach with her husband and dog. Her favorite colors are blue, green, and gold. She enjoys reading good books by some of her favorite authors like Geraldine Brooks, Hanh, Jerry Archer, Joseph Murphy, and Michael Connelly. Elizabeth, her husband, and their pup reside in Santa Barbara, California.