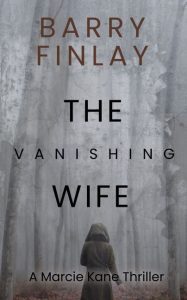 About The Vanishing Wife by Barry Finlay

How far will a man go when someone threatens his family? Mason Seaforth is about to find out. He is a mild-mannered accountant living a quiet, idyllic life in the small community of Gulfport, Florida with his wife, Samantha. That is until he is plunged into an unimaginable world when Sami, as she is known to her friends, vanishes the night of their 20th anniversary. With the help of his wife’s brash friend, Marcie Kane, he follows clues uncovering secrets that lead them into dark and dangerous places. The truth unleashes a terrifying ordeal. The Vanishing Wife will be FREE June 23 and 24, 2022.

Author Bio:
Barry Finlay is a fiction and non-fiction author. In his previous life, he had an extensive career in financial management before retiring in 2004 after thirty-two years with the Canadian federal government. Since retiring, he has divided his time between writing, working as a consultant on financial policy matters, travel, playing golf, climbing mountains, philanthropy and enjoying his three grandchildren.

In 2009, Barry got off the couch and climbed Mount Kilimanjaro with his son, Chris. The experience of climbing Africa’s highest mountain at age 60 with one of his sons and discovering the satisfaction of reaching a goal and giving others the opportunity to achieve theirs, was a non-fiction book waiting to be written. It led to the inspirational Kilimanjaro and Beyond: A Life-Changing Journey. His second book was a travel memoir called I Guess We Missed The Boat.

In 2014, Barry started working on the Marcie Kane Thriller Collection: The Vanishing Wife, A Perilous Question, Remote Access, Never So Alone, and The Burden of Darkness. In 2021, he released the first book in the Jake Scott Mystery Series called Searching For Truth.

Barry has received multiple literary awards, is an Amazon bestselling author, and has been featured in the Authors Show book, “50 Great Writers You Should Be Reading.” He is a recipient of the Queen Elizabeth Diamond Jubilee medal for philanthropy.