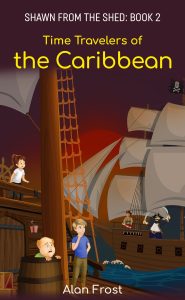 About Time Travelers of the Caribbean (Shawn From the Shed, Book 2) by Alan Frost

Sometimes to beat a pirate, you have to become a pirate

Now the machine is ready to take the group back to 1699 – smack in the middle of the Golden Age of Piracy. At first, their biggest concern is the stormy weather, but when they cross paths with one of the most dreaded pirates of the Caribbean, they realize that their problems have only just begun.

In a time when sailors and pirates settled their differences with swords and cannonballs, they find themselves split up, stranded, and with the lives of innocent merchants in their hands. Once again, Johnny and Ella must rely on crafty planning, trickery, modern technology, and Shawn’s incredible inventions, but this time it may not be enough. Sometimes, to beat a pirate, you have to become a pirate.

Can two stubborn orphans and a quirky inventor change the course of history?

Author Bio:
Alan Frost is an author of middle grade and young adult sci-fi and fantasy. After nearly 15 years working as a translator, Alan decided to take the plunge and start publishing his own material. His main passion is subjects that extend the boundaries of what we think possible, in particular modern fantasy and time travel.

Even though his family is from Washington DC, Alan resides in Copenhagen, Denmark, where he spends as much of his spare time as possible enjoying nature, playing sports and annoying his friends with bad jokes and (hopefully good) story ideas.