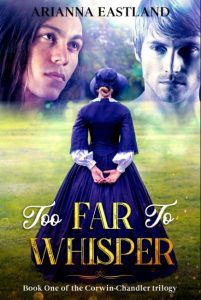 About Too Far to Whisper by Arianna Eastland

In 17th-century New England, Rosalind Chandler’s complete lack of interest in ever becoming a bride is a constant source of speculation and gossip in town.

Then a twist of fate delivers two men – enemies of each other – into her life on the same day. Although both men initially intrigue her, one soon turns her blood cold, while the other heats it to a degree she is unable to comprehend…or deny. Soon her resolve never to wed begins to crumble.

The problem is, the proposal of marriage comes from the wrong man…and he refuses to be denied.

This book is permanently free and the first in a trilogy, but can be considered a stand-alone.

Author Bio:
Hi!
I’m Arianna Eastland, a native New Englander who, at a young age, developed a fascination for the Native-American culture and history in the Northeast. This not only led me to read everything I could find on the subject, it also inspired me, years later, to begin penning historical romance novels featuring Native-American heroes.

I must confess that my writing habits are somewhat unconventional. When I sit down to write, I never have a particular plot in mind and never write a preliminary outline. I just let the story and emotions unfold and flow as I go along. Also, I never know how the book is going to end until I actually write the final page.

Believe me, writing books that are set back in the 1600s has its challenges – first and foremost, deciphering the language that was used back then. Not only did many of the words we use today mean something entirely different in those days, there also were far fewer of them in existence.

I don’t use the “thees” and “thous” of that period in my books, however, because I think they would detract from the flow of the dialogue. I mean, I still can remember reading Shakespeare in high-school English classes and struggling to figure out what the heck the characters were talking about!

But I do try to make certain my characters aren’t speaking words that weren’t even created yet. I wouldn’t, for example, have a Pilgrim in the 1650s saying things like “egotistical” or “rambunctious” because the first time those words were used wasn’t until well over a hundred years later.

Or can you just picture two Pilgrim guys greeting each other with something like, “Hey, Josiah! How’s it hangin’? Gimme five!”

It does bother me, however, that I have to refer to the heroes in my books as either Indians or savages, but that was what the colonists called them back in the 17th century…and I can’t undo history.

I know I never could offer a reading of my books to the public because, to be honest, I wouldn’t be able to pronounce some of the words. For example, the Algonquin word for snoring is “chigualakwsowogan.” And “kbahodwigamigw” means “jail.” But when I do use such a word or phrase in a book, I make certain I let the reader know its meaning so no head scratching is involved.

Not long ago, I took a DNA test to find out more about my ancestry and was surprised to learn that my great-great grandmother, who was from the Province of Quebec, was a full-blooded Abenaki. No one in my family ever had mentioned it to me before…but I do think it explains a lot!

When I take a break from writing, I enjoy walking on the many wooded trails in my area, going to local plays and concerts, playing board games and spending quality time with my friends.