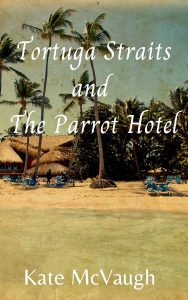 About Tortuga Straits and The Parrot Hotel

Tortuga Straits, a tiny village on the coast of a small island, floating in a forgotten corner of the Spanish-speaking Caribbean. The Parrot Hotel, a once prosperous haunt, now rarely sees a guest. Yet those who still reside in town welcome the calm after decades of busier times.
It’s the anniversary of the day Trader first arrived in this beautiful, seaside town, some sixty-odd years ago. His plan to stay a few months turned into a lifetime, building The Parrot along the way. And with his hotel came jobs, and friends, and prosperity for the locals as well as the travelers who set down roots in Tortuga Straits.
Over food, beer, cigars, and rum, Trader and his friends reminisce about days gone by. Children born and raised and off to a better life in the Capital and beyond. Nature protected and saved from shady developers and ne’er-do-wells. Weddings of locals and travelers alike, brought together by events in Tortuga.
Although the town may be slowly returning to its original state of only flora and fauna and tortugas and palm trees, all those who knew it are thankful for the years spent in such a magnificent place.

Author Bio:
Kate McVaugh writes fast-paced, fun-filled adventures, mysteries, and literary fiction. All are set in foreign countries where she has lived, worked, and traveled.
She grew up in the cold, foggy San Francisco Bay Area, but always felt that she should be living somewhere else. Preferably in a hot, tropical climate, exploring the culture and learning the language.
A two-year stint with the Peace Corps in Brazil is where she first fulfilled that desire for international adventure. From there, she went on to work as an educator both in the US and abroad. Except, that is, when she required a break from the profession. She found her respite while working in bars and running nightclubs.
Kate is also a travel essayist whose work has appeared in Lonely Planet.